This is an experimental film in the true sense (meaning I am playing around with a concept that may not be realized here.) I scanned the surface of the New York Times with my camera in movie mode blurring the text and images so that the structure of the paper reveals itself. The music is by Benoit Pioulard. It is a project that is still in progress. I have recently cut it down and I need to finesse the end.
Posted by francesca pastine at 8:59 PM No comments:

This is an ArtForum piece consisting of 35 ArtForums with Bridget Riley on the cover. Click on it to see the larger image size (which works better). Also below are two of my newest Invisible Women from my Invisible Women series. 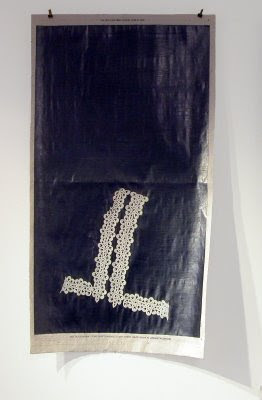 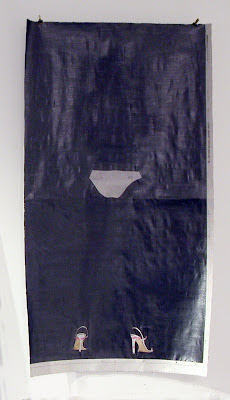 Posted by francesca pastine at 10:46 AM No comments: 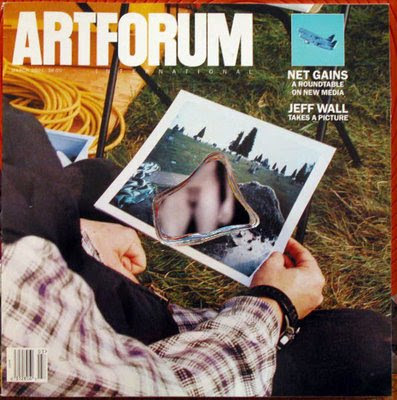 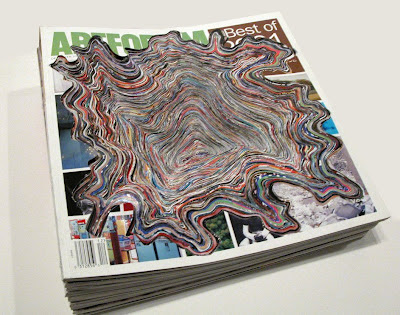 Posted by francesca pastine at 3:35 PM No comments:

This is our dinner with Isabel, Sean, Lucy, Theodora, Don and Marta. Menu: Borsht with sour cream; Antiqua pasta with a cream sage and tarragon sauce; lamb chops with mashed potatoes, gravy, and cucumber salad; custered or walnut ice cream and fresh fruit for desert. I also shot a short video of Albert putting the dinner together. (I will post recipes soon.)

Slice and saute mushrooms in oil, set aside.

Very lightly brown the garlic in oil. Add white wine, tarragon and sage, then bring to boil. Simmer for 10 minutes.

Pour over hot pasta and serve garnished with mushrooms and Romano and Locatelli Cheese.

Cut the cabbage in 1/4" widths and set aside.

Peel beets, carrots and onions. chop into chunks using a knife then put through food chopper (mine is a hand crank); put into a skillet and cover with stock then simmer for 20 minutes. Season to taste.

Add the cabbage and additional stock or water and simmer for another 15 minutes.

cool in the refrigerator for a day. Serve in bowls with a dollop of sour cream.

Sauce:
Partially brown garlic in oil then add stock, cloves, and rosemary and bring to a boil. Simmer for 10 minutes. Season to taste.

Lamb Chops:
Put cast iron pans in oven for 1 hour at 500 degrees. Rub lamb chops with olive oil, salt and pepper. Place in hot pans and put back in oven. Check to make sure it's done.

Serve with mashed potatoes and sauce. 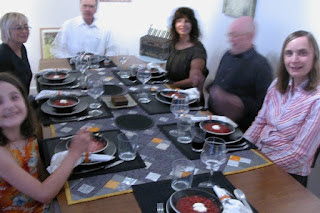 Posted by francesca pastine at 1:17 PM No comments: 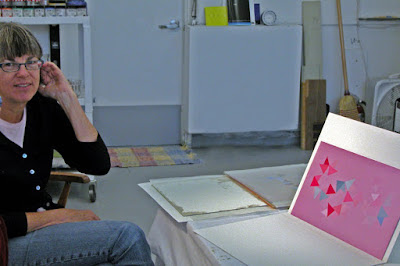 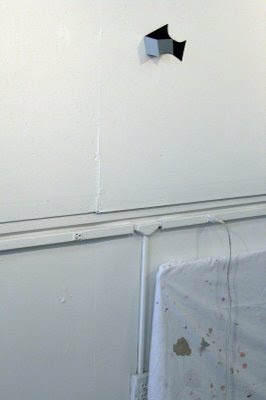 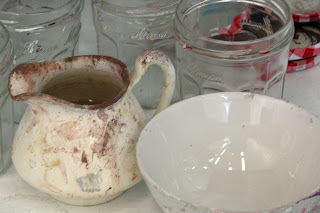 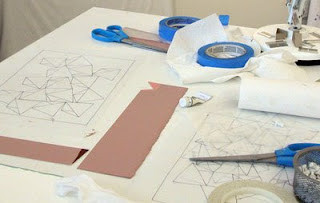 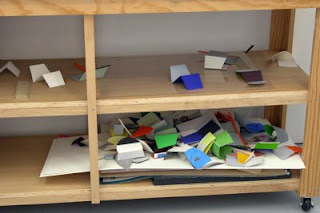 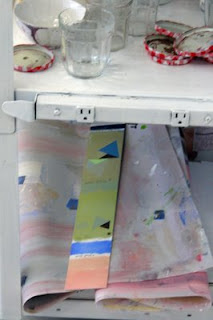 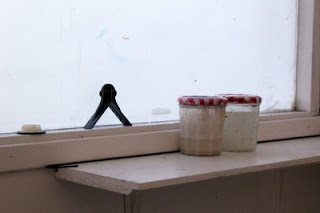 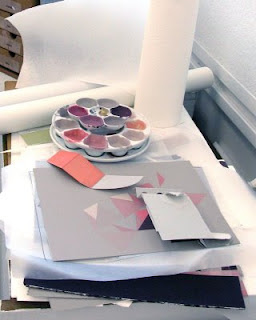 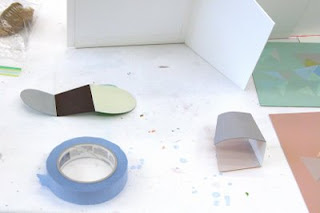 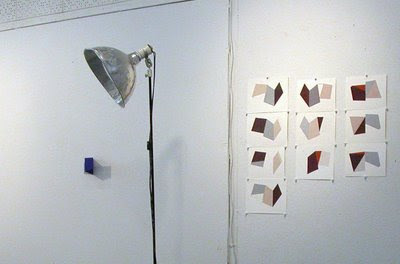 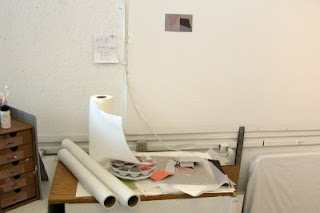 Posted by francesca pastine at 11:02 AM No comments: 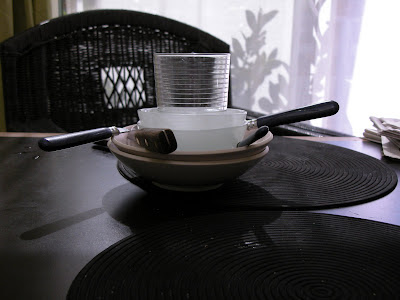 This photo is from my continuing investigation of random domestic occurrences that carry the weight of sculpture.
Posted by francesca pastine at 3:45 PM No comments: 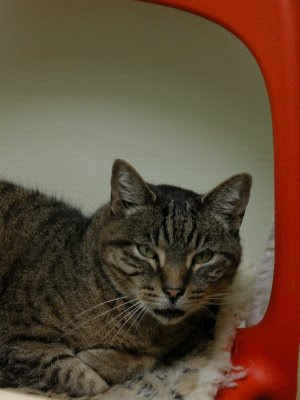 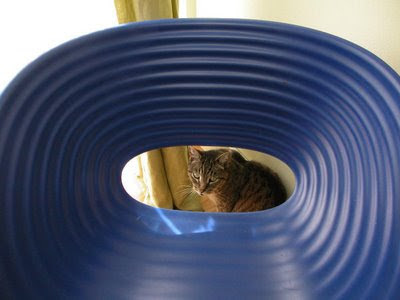 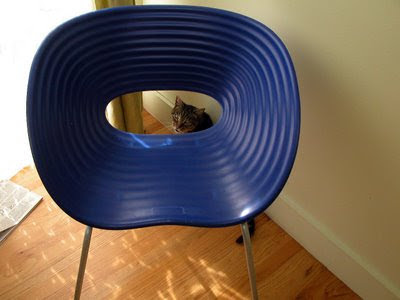 This is my cat, Guarino Guarini.
Posted by francesca pastine at 3:27 PM No comments: 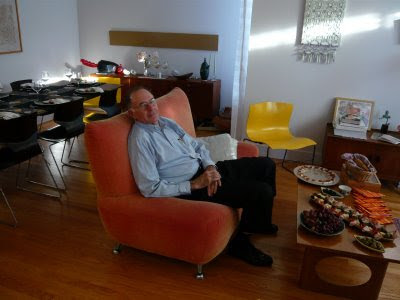 This is before our dinner guest (Robert and Kathrine Dunlevie, Lucy and Hugo Traeger, and Nancy and Larry White) arrived. Afterwards, I am too busy to take photos.

Peel zucchini and blend. Quarter tomatoes and sauté in pan until brown. Add sautéd and canned tomatoes to the zucchini in the blender with the garlic, chicken broth, tarragon, oil salt and pepper. Blend until smooth. Reheat in saucepan. Serves six to eight.

sauce:
1/2 can of of tomatoes
1" square cube or more of chocolate
1/2 cup of chicken broth
10 sections of white peaches
6 cloves of garlic
2 tspns of paprika
salt and pepper to taste
4 tblspns of olive oil

Put all above "sauce" ingredients into a sauce pan and simmer for an hour or more, adding broth to control thickness.

Toss marinated chicken in a very hot pan with olive oil until brown cooking through. Place chicken onto plates and cover with mole sauce.
Serve with caramelized carrots and arugula and onion salad

Carrots: cut carrots with tops still attached horizontally in half, caramelized in brown sugar in a hot pan.

Posted by francesca pastine at 3:39 PM No comments:

Opening at the Lab on May 28

Opening at the Lab of the Invisible Women, Iraqi Casualty and Artforum Excavations 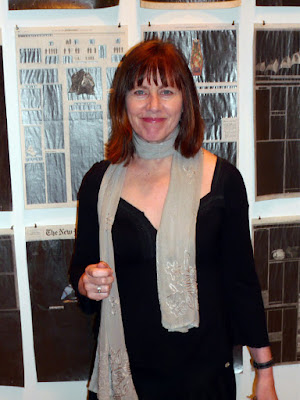 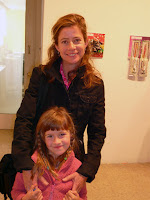 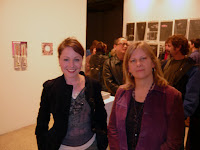 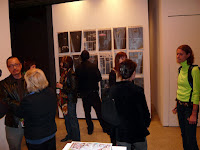 I was happy to get a few good reviews. This one was in the SF Chronicle:

Decades ago, in simpler times, people actually looked forward to reading the magazine, when it served as the New York art world's journal of record. Since then, Artforum has followed the trajectory of the art market itself, retailing moneyed glamour and the atmospherics of contemporary art. Meanwhile, most of the intellectual substance has shifted to its outrigger, Bookforum.

Each issue of Artforum now boasts slab-like bulk and a power like kryptonite to drain the strength of any art professional who tries to face it.

But in an ingenious series showing at the Lab, Pastine has found in the magazine the makings of memorable art, by means connected incidentally to Villeglé's practice.

The hole Pastine has cut in the magazines, stratified with color from their glossy pages, irresistibly brings to mind the physical and emotional voids left by Sept. 11 massacres.

In a related piece without obvious topical reference, she has cut an irregular hole - again looking something like a comic-book strip mine - into a single issue of the magazine, exposing a page apparently empty of all but a soft gray glow.

In two other series here, Pastine has selectively effaced pages from the New York Times to expose not very deeply underlying contradictions, such as the collision of values in advertising and war news or fashions' real and ostensible values to the women who model them and those who covet them." Kenneth Baker 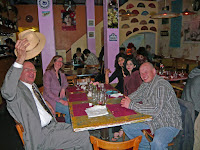 Posted by francesca pastine at 2:34 PM No comments: