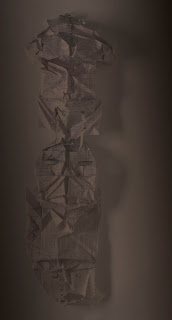 Posted by francesca pastine at 4:41 PM No comments: 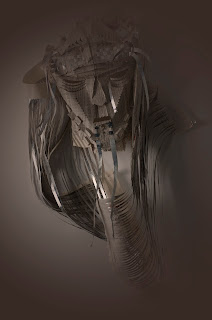 In the stereopsis test for depth perception, one stares at an apparently random jumble of dots until, all of a sudden, select visual fragments coalesce into a defined shape that then, miraculously, detaches itself from the page.
Such was my experience at the Kala Art Institute's sprawling Residency Projects, the culminating exhibition of work by nine jury-selected fellows. Impressive across the board, the 38 works on display range from the super-minimal, as with Seth Koen's barely-there forms embossed in white paper, to the profuse, as with Lauren Rice's large-scale mixed-media collages.
The show privileges no particular point of entry and promises no overarching coherence. Yet, standing back and taking in the whole, three thematically in-sync artists seemed to link arms and step forward from the rest. The work of Alison O.K. Frost, Vanessa Marsh, and Francesca Pastine makes for a brilliant exhibition, in and of itself.
"Post-apocalyptic" seems an apt, if slightly too sensational, way of describing the shared undercurrent here. Frost and Marsh, at least, do not shy away from the word. "I've always had a strange sense of dread or anxiety of a pending environmental doom," said Marsh. "For many (possibly all) people, seemingly opposite urges to insulate and self-destruct exist as driving forces on a personal level, so that pictures of an end of the world as we know it can stand in for the sort of day-to-day 'micro-apocalypse' that we create in our own lives," added Frost. The two artists had never met until midway through their residencies.
To produce her eerie, dreamlike landscapes, Marsh uses an innovative photogram process, in which she layers acetate drawings of West Coast geography and scale models of people, trains, and other objects upon light-sensitive paper, exposing the scene to light at intervals. In effect, things that would normally be lit — radio towers, street lamps — remain dark, while an inexplicable hazy glow emanates from the terrain. Stiff figures, often lugging baggage of some kind, contemplate what feels very much like an aftermath.
Frost's sketches, etchings, and engravings picture nuclear anxiety with a similar serenity, even playfulness. In her DeLillo-esque "HazMat Choir," a rapturous congregation sings in anti-radiation suits. Elsewhere, a cabin rests idyllically in the shadow of power plant cooling towers; or, festive party flags deck out what is titled "Chernobyl Theme Park."

Meanwhile, Pastine's sculptures and accompanying ink-print photographs depict striking tribal masks that, upon close inspection, turn out to be fashioned from pages of The New York Times' stock market gauge. This smart, metaphorically loaded gesture (financial speculation as pagan ritualism, The New York Times as cultural totem) warrants a review of its own. In concert with the post-apocalyptic voices of Marsh and Frost, however, the masks emphasize another reading — as anthropological discoveries to be made by future humans, who will contemplate in softly lit wonder the mysterious relics of our own, long-since-extinguished civilization.
Residency Projects runs through September 15 at Kala Art Institute (2990 San Pablo Ave., Berkeley). 510-841-7000 or Kala.org

Posted by francesca pastine at 7:10 PM No comments:

THIS IS HOW MY BRAIN WORKS exhibit at Radiator Gallery 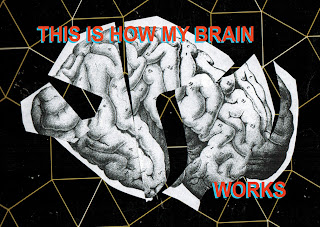 This is How My Brain Works

Radiator Gallery is pleased to announce the opening of its sixth show This Is How My Brain Works, a group exhibition that inaugurates the gallery’s second season.  With over 30 works made by sixteen artists, the show examines the practice of collage through its many iterations and permutations ranging from works on paper to artist books, photographs, sculpture, textiles, digital projections and video.  Through the presentation of visually diverse but not conceptually disparate works, the show helps define collage as both a working method still robust at the turn of the 21 century but more importantly as a manner of processing information either willfully or uncontrollably.  The show’s title is a comical send-up of the precognitive jumble that is the necessary basis for the eventual creation of meaningful logic in the human brain.

Whether culled from magazine pages, scavenged from a neighbor’s recycling bin, plucked from the uncharted corners of the internet--or the physical corner of an urban street—this group of artists shares a love for material with a history.  It can be cultural memory, what artist Christian Marclay describes as the “recognition of the source material with the pleasurable violence of transformation”, or it can manifest itself in the physical wear objects undergo with the passing of time.  Whatever the case, the audience’s synapses begin to fire upon seeing this new/old thing well before a fully formed idea congeals in their heads.  This is what all art is about.  Collage highlights this fact.

The current generation of collage and assemblage artists is conversant in the standard and accepted history of the form as modernist paradigm par excellence.  While this history obviously informs artists in this show, they have an advantage over their predecessors in contextualizing this working method as pre-modern far more easily due simply to their place in time.  The palimpsests of ancient cities and the collage roots of film projection start to seem much closer when looked at from this perspective. What was once considered an artistic reaction to the specific age of communication can be seen in retrospect as a responsive method to connect art and the world in any age.

Michael Lee is an artist and teacher. This is his first curatorial effort. He was awarded a residency at Cooper Union in 2005 and at the Robert Blackburn Printmaking Studio in 2008. Michael earned a BFA in art history from The University of Texas at Austin and an MFA in painting from Hunter College in New York.

A catalogue will be published in conjunction with This Is How My Brain Works.  Please also find related events and documentation at www.radiatorarts.com.  For more information and images, email info@radiatorarts.com or call 347 677 3418.

A newcomer to the burgeoning art scene surrounding MoMA PS 1 in Long Island City, Queens, Radiator Arts was started by Tamas Veszi in 2011 as a venue dedicated to giving independent curators and artist-curators access to space and providing an opportunity to strengthen the vital artist community of north Brooklyn and western Queens.