In a Brooklyn basement, blonde wood shelves stuffed with leather-bound tomes line the walls. Doug Beube, a mixed-media artist, has a home studio full of books, but his basement is not your typical library. In the center of the room lie Beube’s carpentry tools — a table saw, a dremel rotary tool, a belt sander. Beube motions to the books on the walls, “These,” he said, “are up next for the guillotine.”
A paper guillotine — a large paper cutter with a long, knife-like handle at one end — is a normal tool for those working with paper. Beube would know. He apprenticed with a professional book binder while getting his masters in photography in Rochester, N.Y. It’s an appropriately dramatic object for transforming a book into a work of sculptural art.

“Rebound: Dissections and Excavations in Book Art” opened May 23 at The Halsey Institute of Contemporary Art, in conjunction with Spoleto Festival USA. Curated by Karen Ann Myers, “Rebound” features Beube’s work alongside other artists who use books as their raw material — Long-Bin Chen, Brian Dettmer, Guy Laramee and Francesca Pastine. “So there is a use for these old books that we keep throwing away,” said Jean Meyer, who manages the sorting room at the Charleston County Public Library.

At the show’s opening, she was looking at a piece by Dettmer made of 10 Collier’s New Encyclopedias and teasing her colleagues about the surplus of such outdated volumes. Part of her job is selling old books to help raise money for the library. Her reaction is the exactly what Dettmer hopes for. Initially, he felt guilty for cutting into books, but once he started sculpting with reference books — “the first to become extinct because of the Internet,” he said — he felt like he was doing a service for book preservation. Dettmer said his process was a little like reading, because he never knows what will come next as he carves through one page at a time. After he seals the books with varnish, he uses an Xacto knife and tweezers to carefully cut around illustrations and a few words he wants to keep inside the spine of the book. He said he wrestles with whether his creations are books or sculptures, “because a wooden table is no longer a tree, but it’s still wood.” Beube has his own adapter’s philosophy. He routinely tears into the guts of a book, cutting pages and arranging them into tracts and EKG-style waves. But there’s one book he would never alter: He describes the Gutenberg Bible, the first mass-produced book off the printing press, as an information technology milestone. “Why would I want to destroy the first computer?” he said, while noting that his other bookworks often function as collaborations with those authors.

Francesca Pastine works with the glossy covers of ArtForum magazine, No. 11 Xacto blade in hand. She doesn’t consider herself a book artist, but rather a material artist. “I’m not a text kind of person,” Pastine said. “I’m totally dyslexic.” That explains why she sees her work largely as an unsolicited collaboration with the artists on ArtForum’s covers. Pastine likes to flip through the magazine to expose visual repetitions in a way that makes the magazine look like it’s melting one artist into another.

It’s ironic that the College of Charleston’s bookstore is visible across the street from the front steps of the Halsey. Just up the block is the Addelstone Library, where Chen has installed a Zen garden carved from books. Chen said Asian artists are known for landscapes and for adhering to tradition. He made an unorthodox move by choosing books as his medium 21 years ago, as a young artist fascinated by reading in Asia and America. “Books are on a bookshelf, and no one touches them,” he said. “They become seen as a waste of space.” Instead, Chen forces audiences to interact with books he has turned into stepping stones in Addelstone’s rotunda. Chen encourages people to walk on his book stones from one side of the library to the other. Laramee, whose bookwork accounts for about a third of his artistic production, has come to a shrewd conclusion about adaptation. “They are metaphors,” he said of his art. He has two pieces from his island series on display at the Halsey. Each one has rows of Encyclopedie Universalis — Laramee is French-Canadian — with the top gutters hacked off, except for one or two areas of vegetation rising from the sea of pages. He carved the islands out from the tops of these dusty old encyclopedias to draw out a feeling of isolation. “Metaphor is probably the main property of art anyway,” Laramee said. “Like if you come close to a painting, you see it’s only blobs of paint on a canvas. You know the whole time it’s not real, but you believe in it anyway and it creates a feeling in you.”

Paige Cooperstein is a Goldring Arts Journalist from Syracuse University.

Posted by francesca pastine at 9:29 PM No comments: 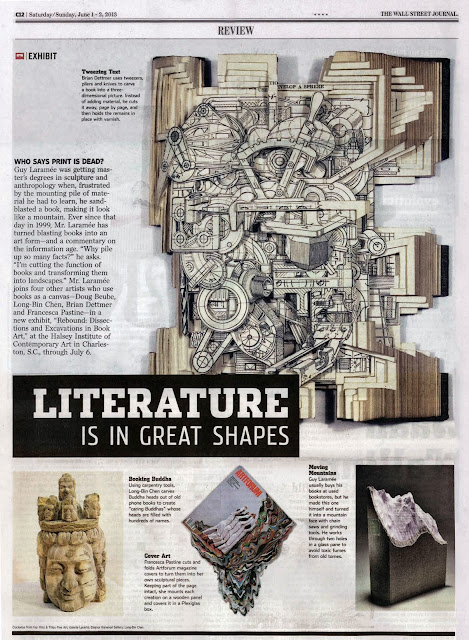 Posted by francesca pastine at 9:18 PM No comments:

Rebound's five artists give a second life to books


"Books are conversations, books are living material. That's why people value them and why they're so disturbed by their destruction. This understanding of the importance of the book is so remarkably ingrained in human psychology." —Karen Ann Myers

Artists cut, carve, and tear apart books to make a powerful statement about the information age.

Posted by francesca pastine at 9:03 PM No comments: