Apparently, my art was just put on the auction block and sold for over the estimated price. Found on http://www.artdaily.org/

LOS ANGELES, CA.- Bonhams Butterfields’ Made in California auction on November 17, 2009 did especially well, signaling that the market for California art remains strong. Regardless of the auction’s regional theme, telephone bidders from around the globe vied for works by the golden state’s leading modern and contemporary artists. The sale, which was simulcast from Los Angeles to San Francisco, established world record prices for works Gregory Kondos, Raimonds Staprans and several other California artists.

“The cover lot, "Beach Girl", by Sacramento artist Gregory Kondos created quite a stir. Bidders from the east and west coasts competed for the California beach scene. Excited bidders occupied the telephone lines in the San Francisco and Los Angeles salerooms. "Beach Girl" sold for $51,850, more than triple the pre-sale estimate, and established a world auction record for the artist,” said Holly Sherratt, Director of the Made in California Department at Bonhams & Butterfields.

Wayne Thiebaud’s "Third Street Avenue Store" also highlighted the sale. The oil painting from 1956 sold for $85,400. “'Third Avenue Store' was one of Thiebaud’s earliest paintings dedicated to consumer culture. The work was created in 1956 when the Pop Art movement was beginning to emerge,” said Sherratt.

“We were especially pleased that the property from the Heller Ehrman Collection sold at or above Bonhams & Butterfields’ presale estimates. Many of these artists were new to auction and we were pleased to see competitive bidding for their work,” said Sherratt.

Made in California auctions will continue in May 2010.
Posted by francesca pastine at 7:40 PM No comments: 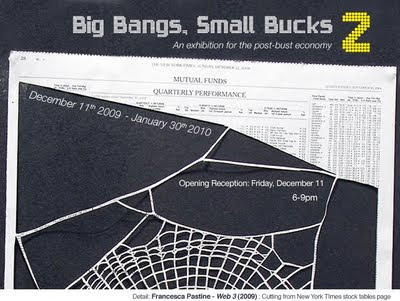 I am participating in the second Big Bang Exhibition at Dean Jensen Gallery. They will be showing work from my Spiderweb Project and Supermarket Cart Project. http://www.deanjensengallery.com/bb2_index.php
Posted by francesca pastine at 11:55 AM No comments:

I have just been awarded a Pollock-Krasner Froundation Grant! http://www.pkf.org/
Posted by francesca pastine at 9:53 AM No comments: