Architecture Of Life
Posted by francesca pastine at 5:39 PM No comments:

Pastine annexes Artforum: The work of San Francisco artist Francesca Pastine has a unique currency. She has rooted it in the fact that almost everyone in the art world takes some note of the art press, but few actually read it. Blame bad writing, a rising tide of post-literacy or blog fatigue, but that's how things stand.
Artforum - a New York publication founded in San Francisco in the early '60s - once did figure, in simpler times, as the house organ of the art world.
But then the art market and criticism and communications technology went global, and New York and Artforum lost their centrality - except as brands.
Pastine treats the Artforum brand - physically - as grist for amazing constructions, or deconstructions, of paper instantly recognizable as her handiwork.
She frequently cuts into issues of the magazine, treating its colorful, advertising-choked pages as geological strata. In the long vertical "Artforum #35 Collaboration With Bruce Nauman (Pour Series)" (2012), blob-like cutouts cascade down through several vertically arrayed September 2007 issues of the magazine, finally drooping beneath the bottom one.
From the physical comedy of Pastine's work, and its ancestry in the de-collage of artists such as Raymond Hains and Mimmo Rotella, emerges a nightmare of visual culture deliquescing into a mercurial substance whose true name may be celebrity or profitability.
Francesca Pastine: Unsolicited: Paper works. Through July 7. Eleanor Harwood Gallery, 1295 Alabama St., S.F. (415) 867-7770. www.eleanor harwood.com.

KUSF IN EXILE with Margaret Tedesco 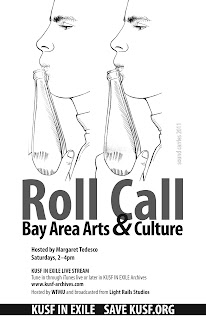 I am going to join DJ Margaret Tedesco, and artists Leah Rosenberg and Heather Villyard on Margarets show on June 9 at 2:30.  Tune in!

Tune into KUSF IN EXILE Live through iTunes in college / university category
and later in the archives at www.kusf-archives.com

Posted by francesca pastine at 3:30 PM No comments: 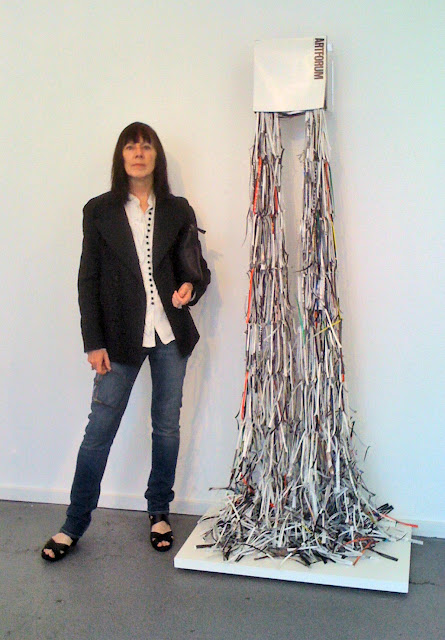 Posted by francesca pastine at 10:00 PM No comments: